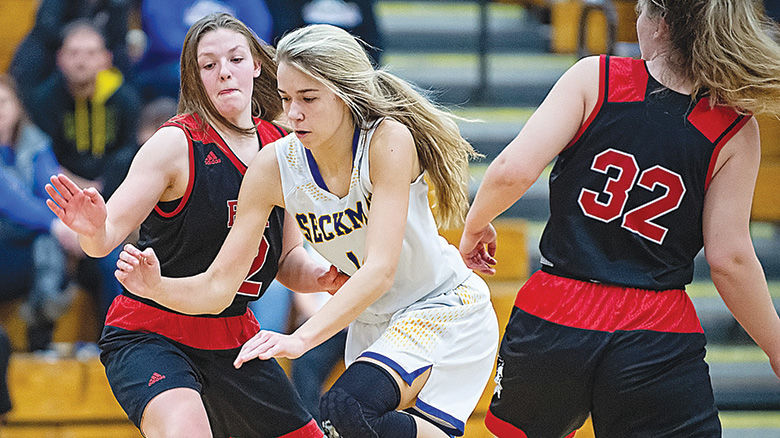 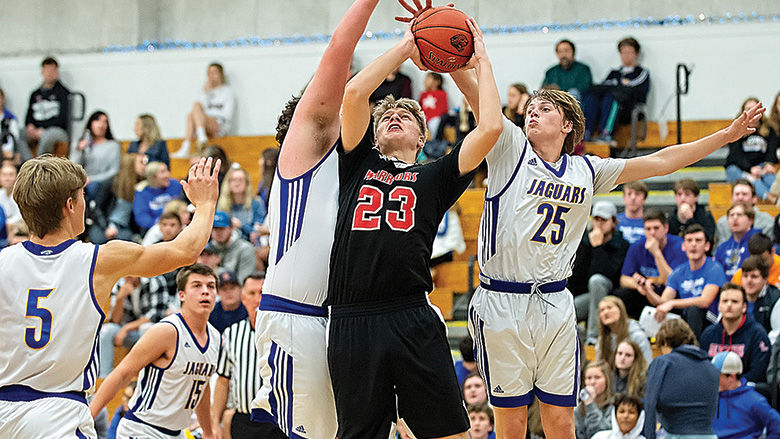 Fox’s Keegan Schubert tries to shoot through the Seckman defensive pairing of Merrick Bonastia, left, and Nate Mertz in Imperial.

Fox’s Keegan Schubert tries to shoot through the Seckman defensive pairing of Merrick Bonastia, left, and Nate Mertz in Imperial.

Three times this season, the Seckman girls basketball team has held its opponent to three or fewer points in a quarter.

Against Lindbergh on Dec. 10, the Jaguars shut out the Flyers in the fourth quarter of a 63-41 win. Hosting Jefferson on Dec. 19, Seckman limited the Blue Jays to one point in the third quarter of its 64-26 win.

At the annual Shootout against Fox in Imperial on Dec. 20, the Jaguars got out to an 11-0 lead and were up 31-23 at halftime. With head coach Brian Metteer absent because of a family matter, Jim Claxton led Seckman. Claxton said he talked to the Jaguars about their defensive performance against Lindbergh and Jefferson.

Seckman held the Warriors to three points in the third and cruised to a 47-38 win, turning around a 42-36 loss to Fox at the same time last season. The Jaguars are 5-1 and their only loss was by a point to Farmington.

“We got into our game real quick pressing on defense and attacking on offense,” Claxton said about Seckman’s early lead. “At halftime, we talked about the previous two games and said if we could do that in the third we could put Fox on its heels. I don’t think anybody scored in the first three minutes (of the third).”

The Jaguars suffocated the Warriors in transition playing man-on-man defense in the half court. Claxton also had them playing a zone press at times.

“Our half-court man defense was so good that (third) quarter we limited their opportunities,” Claxton said.

The meeting between the Suburban Conference Green pool rivals showcased an excellent offensive matchup between Fox junior Minea Dervisevic and Seckman senior Makayla Parton. Dervisevic led the Warriors (3-5) with 14 points, while Parton led the Jaguars with 16.

Senior Abby Townsend is given the task of guarding the top scorer of Seckman’s opponents. Townsend drew the matchup against Dervisevic.

“My main focus is to do what I do well and that’s shut down anyone who puts up points,” Townsend said. “If they are a driver, I don’t let them get to the basket. If they shoot from the outside, I stay on them. We all work as a team.

“Our man-on-man defense is good. We can get up on our players and we’re very good at that. After halftime, when we get back on the court and we’re like alright, let’s turn it on right here. It’s like the beginning of the game again.”

Dervisevic scored many of her points after Seckman stopped using the press.

“She likes to put the ball on the floor and get to the basket,” Claxton said about Dervisevic. “Fox is going to run (Dervisevic) off screens and all of our perimeter players gave Abby help and communicated with her. She passed that assignment with flying colors.”

Amelia Chapman leads Fox in scoring with 10 points per game this season, but she scored just one against the Jags.

“We have been on point with controlling the ball when we need to,” Townsend said. “Our offense is alongside with our defense.

“The Fox game has a lot of nerves and pressure. We’re all seniors and we’re ready to get out there and show we can play. It was amazing to get that win over Fox.”

Parton made 8 of 12 shots from the free-throw line and Seckman’s team total was 17 of 22. Zone pressure in the fourth led to six points off of three steals.

“She had her typical Makayla game on offense,” Claxton said. “It wasn’t the most free flowing of games with all the fouls. We want to get to the line 20 times a game and make 17 of those. We put Parton at the top of a press and she’s a matchup problem for a lot of teams.”

Despite the excellent start, Claxton said the Jaguars haven’t played their best basketball yet. They started last season 5-1 and finished 13-11.

“We expected to have that record or be 6-0 at this point,” Claxton said. “The players have experienced success here and with the softball team. We’re going to get into the meat of our schedule (in January) and play some good competition. We’re going to see high-level teams to meet that level.”

With nine seniors on the team, Townsend said the chemistry between them is leading to a special season. They’ll need it with three-time Class 5 District 1 champion Jackson in their district again.

Seckman’s shooting performance wasn’t sweet, but the boys basketball team made 16 shots from the charity stripe to hold off Fox 50-46.

The annual C-6 battle between the freshmen, junior varsity and varsity squads was capped by the varsity boys in Imperial on Dec. 20. The Jaguars swept the varsity boys and girls games. And although the host Jaguars and Warriors compete in the Suburban Conference Blue pool, the game didn’t count in the conference standings.

None of Seckman’s players scored in double figures, which makes the win more incredible.

Fox was led in scoring by Myles Richardson and Noah Malear, who had 16 points apiece. Richardson corralled eight boards for the Warriors.

“That’s exactly how I would put it,” Williams said. “But we had 15 offensive rebounds and only turned the ball over eight times, which is something we strive for. We’ve been talking to them about having a complete team effort and 10 different guys scored, which doesn’t happen a lot for us. Anytime you can have Isaac with one basket, and still come away with a win, we’ll take that. It was a huge win, to get us to .500.”

Williams said Miller has stepped up in the scoring department. Luke Salsman is coming off an injury from the football season, and he’ll be playing a lot more minutes.

“And we also have Mertz, who is a starter now (as a sophomore), after not even being on our radar.”

“Actually, I thought we played decent,” Wilken said. “Offensively we got pretty much the shots we wanted to take. We just missed some at crucial times. If I was disappointed in anything, it was the fact that the game came down to free throws and rebounds and we were 6 of 18 from the line.

“I thought we played a pretty good game all around, but we missed too many free throws. I think we’re starting to play better offensively, but it’s going to take Colby Reese and Brendan Moss to knock down open shots. And from our free throws, to our defensive rebounding, we have to get way better.”