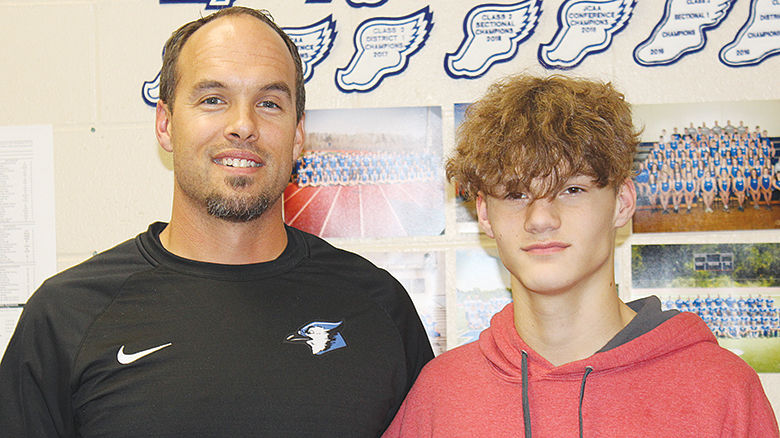 Alex Rouggly, left, and Will Breeze 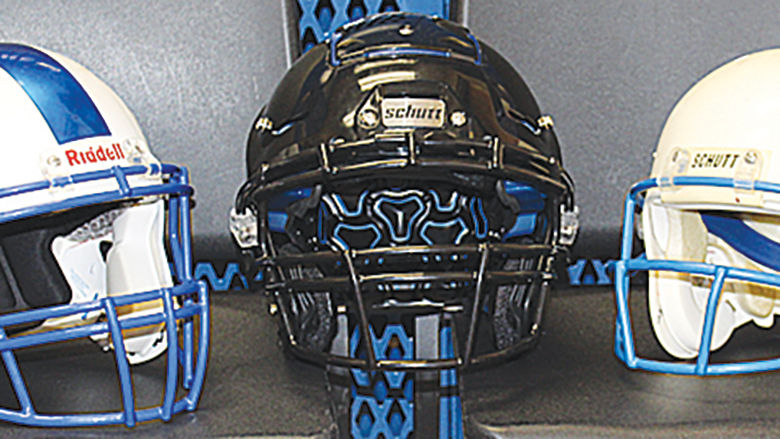 Alex Rouggly, left, and Will Breeze

Will Breeze was doing what he’d been trained to do.

Midway through the second quarter in a Class 3 District 1 football game on Nov. 1, the Jefferson sophomore was backing up to block for a St. Pius X kickoff. The Lancers kicked deep to junior Colby Ott. The crown of Breeze’s helmet collided with a St. Pius player’s helmet. After that, Breeze’s head hit the thigh pad of teammate Will Schnitzler, who was blocking.

“The first thought I had was I’m paralyzed. (Brandon Perry) told me to stay on the ground until (Jefferson head coach Alex Rouggly) came out,” Breeze said while watching the replay of the incident in Rouggly’s office on Nov. 7. “As soon as I tried to look up at Brandon, I noticed I couldn’t feel anything up to my neck and a sharp pain was spreading from my spine to my skull. It was like a sharp pinch. I’ve never experienced that kind of injury. I wasn’t going to take any chances. I was scared. I just wanted to get off the field as soon as possible.”

Sean Rudolph is an athletic trainer who works for Kidz Biz Pediatrics in Festus and works many of the athletic events for St. Pius. Rudolph is a graduate of Truman State University in Kirksville. Rouggly motioned for Rudolph to look at Breeze.

“I made sure (Breeze) was responsive,” Rudolph said. “I noticed that he was a little out of it and not talking real well. He was complaining that his neck was hurting, so I held his neck in place so I could stabilize it.”

Rudolph said he knows how serious neck injuries can be. They are potentially life-threatening, although he said Breeze’s injury didn’t reach that level. He’s trained to keep the neck from moving and to keep the head level. Breeze’s helmet wasn’t removed on the field. Paramedics from the Joachim-Plattin Ambulance District arrived at St. Pius within a few minutes and took Breeze to Mercy Hospital Jefferson in Crystal City. That’s when Breeze’s entire uniform was cut off.

“He had all feeling in his hands,” Rudolph said. “He was able to move his toes. He never lost feelings in his extremities.”

Before Breeze was taken off the field, Rouggly assured him that he’d be OK. Breeze’s mother, Jane Breeze, was living out her worst fears. She grabbed her son’s hand and made him wiggle his fingers. She could see the panic in his eyes.

“I try not to be that hovering mom,” said Jane, who is a dentist in Festus. “When I first got on the field, it looked like he had the breath knocked out of him. He was moving. It was heart-wrenching to see your own kid like that, and he was hysterical.”

Jane and her husband, Matt, have four sons: Will, Ben, Drew and Nate. All of them played soccer until they got to high school. All of them switched to football. Nate, the youngest, is in eighth grade. He suffered an injury the first week of practice. Jane said she wouldn’t try to convince any of her sons to avoid playing any sport.

It wasn’t the first time Rouggly had to deal with an injury that sent one of his players to the hospital in an ambulance.

In 2017, while playing at home against Herculaneum, Collin Gosnell broke a leg playing for the Blue Jays.

Rouggly, who has a young son and daughter, said when he saw the condition that Breeze was in, he began to think about his own children.

“The official told me to come out and see how Will was doing,” Rouggly said. “He was hyperventilating. I asked him if he could move his hands and his feet. He grabbed my hand. St. Pius’s trainer came out and his parents, Matt and Jane, and brother, Ben, were there.

“As a coach, your heart sinks to see a kid go down, try to get up and go right back down. Football is a contact sport and you know that injuries are probable. You’re a parent, and you think, ‘This is your kid and it’s gut-wrenching.’”

Rouggly said it took 20 to 25 minutes after the collision before Breeze left for the hospital. With the game not half over and the season on the line for both teams, Rouggly had to calm his players down and get them re-focused.

“You have 37 other teammates worried about their brother,” Rouggly said. “I got them all together and we said a prayer for Will. We play this game knowing these are risks that are possible.”

Breeze had a CAT scan and MRI at Mercy and then was transferred by ambulance to St. Louis Children’s Hospital. When doctors there were confident he could safely go home, they put on a neck brace and released him.

Breeze said he didn’t get home until 4 a.m. Throughout the whole ordeal, Breeze slipped in and out of sleep. He was never diagnosed with a concussion.

“I was so drowsy. I could tell something was wrong with my head,” he said. “I felt pain in my arm. I could move everything, but not fast. I stayed in my bed until 3 p.m. the next day. I was scared to fall asleep when I got home. You could do something in your sleep and not control it. I woke up after a couple of hours and started to realize I was OK. It’s getting easier to fall asleep.”

The neck brace is gone, and Breeze was just cleared to start practicing with the basketball team on Monday. His uncle, Sean Breeze, is Jefferson’s head coach.

The injury isn’t enough to keep Breeze from playing football again, he said.

“Sometimes you have to know your place on the field and who you’re going against,” he said. “It’s good to be brave, but you have to take care of yourself. I was more confident with hitting bigger kids. Football is a part of me that I have to live. If I don’t, I’m not living.”

Jane said during the ride to Children’s Hospital, Will said he would never play football again.

The technology in helmets continues to improve as concussions and the physical impact of football becomes more of a hot topic. Jefferson’s football players wear Riddell SpeedFlex helmets, which cost about $400 each. Every helmet must be certified as safe by the manufacturer every year or they’re taken out of commission. The helmets have a life expectancy of 10 years and the Blue Jays have been wearing them for five years.

Rouggly showed me a Schutt helmet that he’d like the district to buy when the Riddells are obsolete.

“We haven’t had many concussions. I think that has to do with the technology of the helmets,” Rouggly said. “The kids continue to get stronger and faster so you have to equip them as best as you can. If Will’s wearing an older helmet, I don’t know if he’s standing here today talking to us. He probably would have suffered a serious concussion.”