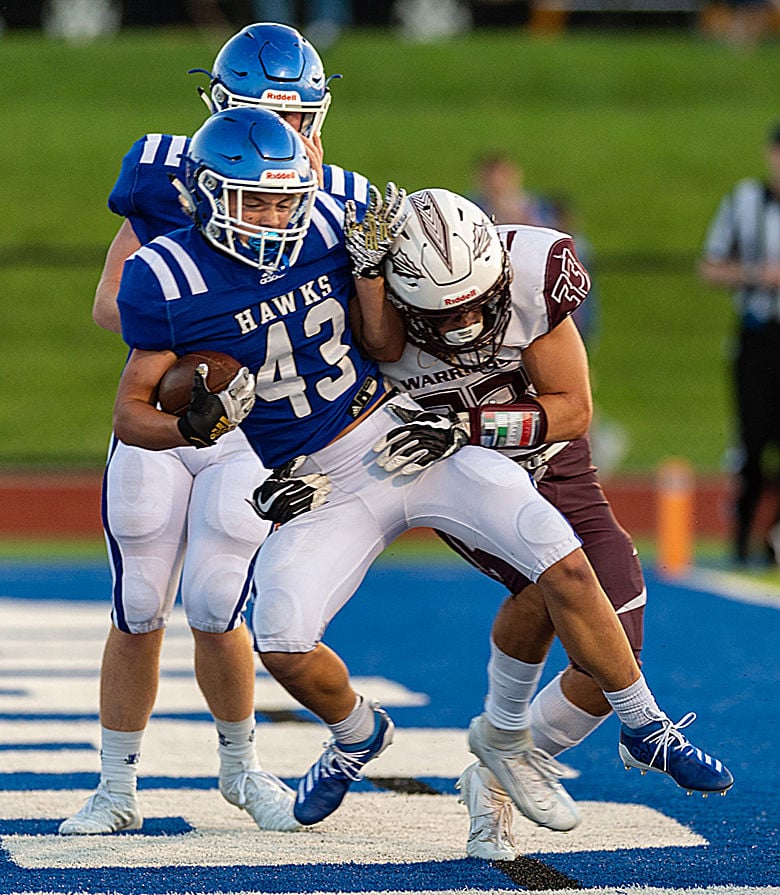 Hillsboro running back Jaxin Patterson scores a touchdown against St. Charles West on Friday night. The freshman led the Hawks with 148 yards on the ground. 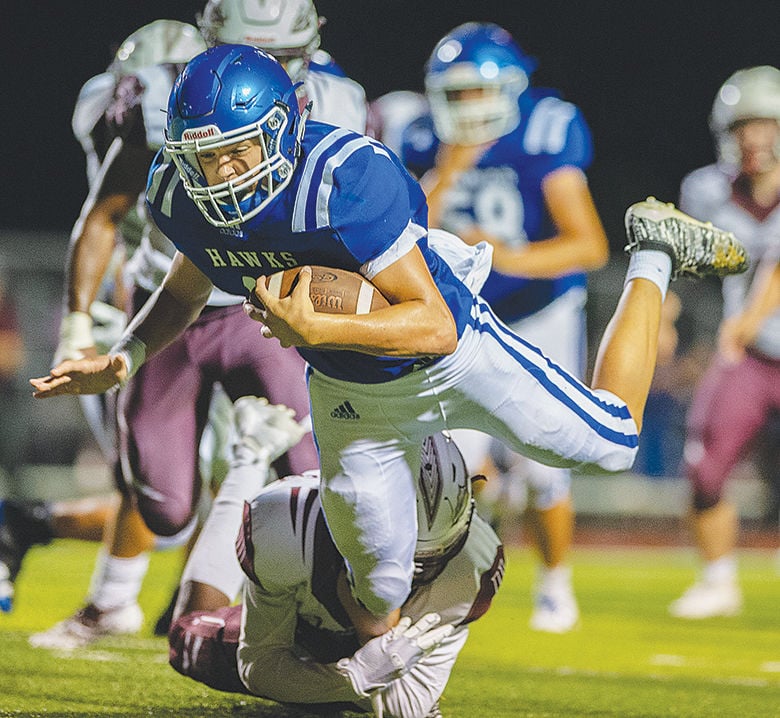 Hillsboro freshman Austin Romaine is tackled by a St. Charles West defender during Friday night’s game. Romaine scored a touchdown and rushed for 83 yards in the Hawks’ 34-22 loss to the Warriors.

Hillsboro running back Jaxin Patterson scores a touchdown against St. Charles West on Friday night. The freshman led the Hawks with 148 yards on the ground.

Hillsboro freshman Austin Romaine is tackled by a St. Charles West defender during Friday night’s game. Romaine scored a touchdown and rushed for 83 yards in the Hawks’ 34-22 loss to the Warriors.

But the two Hawk running backs weren’t idle against visiting St. Charles West in Friday night’s nonconference football game. Patterson and Romaine gave Hillsboro fans a glimpse into what the Hawks’ triple-wing offense could look like for the foreseeable future as they almost exclusively ran the ball in a 34-22 loss. Patterson rushed for a game-high 148 yards, while Romaine had 83 as Hillsboro gained 304 yards on the ground.

“They’re a different style of running back. They’re throwbacks at the position and we haven’t had that at Hillsboro in quite some time,” Hillsboro head coach Lee Freeman said.

Patterson and Romaine played in the Hawks’ season opener against Sullivan. Hillsboro (0-2) was shut out 6-0 by the Eagles, but the game was disrupted several times by lightning and heavy rain and didn’t end until midnight. Freeman said it was impossible to gauge how well the offense could perform under those conditions.

“I tell you what we did know is we had lots of opportunities to win and we didn’t capitalize,” Freeman said of the loss to Sullivan. “It was a strange evening all the way across. When you add in the weather with the delays, you’d be crazy to think it wouldn’t affect 14- and 15-year-olds.”

It was the second straight season the Warriors (2-0) beat the Hawks. West’s speed was on display on its long gains. Quarterback Brendan Sportsman averaged 16.8 yards per carry (7 rushes, 118 yards) and he tossed two touchdown passes. In the Warriors’ season-opening 44-14 win against St. Dominic, Sportsman, a senior, punctured the Crusaders with a 63-yard touchdown pass, 8-yard TD run and returned an interception 32 yards for a score.

“He’s really dynamic. He’s a playmaker who’s really aggressive and he looks to make plays and he had some really nice passes,” West head coach Gary Strauss said. “Anthony Lemons had two really nice catches. One of our biggest assets is our team speed and it’s going to help us all year.”

The Warriors and Hawks both scored on their opening series. On West’s first drive, junior running back Dominic Flint broke a tackle at the line of scrimmage and scampered for a 37-yard touchdown with 9:08 left in the first quarter. Kicker Darius DeCarolis made the PAT to give the Warriors a 7-0 lead.

Then Freeman pulled the cover off his new offense and Patterson went to work, carrying the ball six times until he reached the end zone from 2 yards out with 6:32 left in the first. Patterson made the two-point conversion and the Hawks led 8-7.

“They caught us off guard,” Strauss said of Hillsboro’s freshmen runners. “With that being said, we have to play with lower pad level. Even with what they do with the double wing, they imposed their will on us at times and we didn’t have an answer.”

However, when Sportsman got past the Hawks’ front seven, he kicked it into another gear and ran for a 56-yard TD on West’s next drive and DeCarolis’ extra point gave West a 14-8 lead.

“St. Charles West has some talented players and you respect them because they do what they do,” Freeman said. “Last year it was the same kids. They physically beat us last year and I felt like they didn’t do that this time. I couldn’t be more proud of our kids tonight.”

Hillsboro’s offense methodically shoved the Warriors’ defense 72 yards on the game’s next series as it took 19 plays for Patterson to cap the drive with his second 2-yard TD. This time the conversion failed and the game was tied 14-14 with 4:37 left in the half. The drive took more than 12 minutes.

“I couldn’t be more proud of the resiliency of our offensive line,” Freeman said. “They did exactly what we asked them to do. We’re not worried about the scoreboard right now.”

A little over a minute after the Hawks tied the game, senior Jamesen Reese caught a 67-yard touchdown pass from Sportsman to make it 21-14. Reese took a short pass in the flat and outran several Hawks to the end zone in another display of speed.

The Warriors began to take control of the game when a bad snap netted a two-yard punt and set West up at the Hillsboro 37-yard line with 1:06 left in the first half. A penalty on the Warriors moved them back 5 yards, but Lemons, a senior, hauled in a 42-yard TD pass from Sportsman to give West a 28-14 lead into the break.

When the Hawks’ first series of the third quarter stalled, senior Austin Perez punted the ball 50 yards and put the Warriors back at their 18. But it took West just four plays to find the end zone and take full command of the game. Senior tight end Avery Edge caught a 15-yard pass and Sportsman pulled up the Hawks with a play-action fake before rushing for 36 yards. Flint scored on a 24-yard run the next play. Hillsboro blocked the PAT and the Warriors led 34-14 with 7:42 left in the third.

After West turned the ball over on downs at the Hawks’ 17, senior quarterback Tyler Sizemore guided Hillsboro on an 8-play drive where Romaine did most of the work. Romaine’s 19-yard run was followed by his 5-yard TD and two-point conversion as Hillsboro drew within 34-22 with 10:39 still to play.

It took the Warriors 10 plays to reach the Hawks’ 1. Lemons’ 26-yard reception set West up with first-and-goal from the 1, but Sportsman fumbled the ball into the end zone and junior Gabe King recovered it for Hillsboro.

The Hawks had two more possessions, but Sizemore threw two interceptions to Flint, who gained 78 yards on nine carries and returned three kicks for 64 yards.

“I knew Flint would be better this year,” Strauss said. “He kind of got picked on a couple of times last year because he didn’t want to get beat. Now he thinks he can play against anybody.”

Despite the loss, it’s safe to say Freeman, his assistant coaches and the Hillsboro fan base have a lot to look forward to.

“We did a lot of coaching tonight with the young players we have,” Freeman said. “The coaches knew and now I think our players know that we have some decent talent with some young guys who really stepped up and helped us.”